To all junior hockey players . . .

The Hockey Victoria Academy has a new look for this year, so please read the information below carefully to find out how it will operate for 2016/17.

Use this link to nominate for U13 and U15 Draft Camp: https://2016draftcamp.eventdesq.com/

Do I have to be in the HV Academy to get in a State Team?

No, you do not need to be in the Academy, however, it gives you extra high-level coaching and opportunities to be assessed by the selectors.

What is the Hockey Victoria Academy?

The Hockey Victoria Academy program is run by the Hockey Victoria High Performance Department and involves intensive skill based training, modified games, full field match play, fitness testing and a range of educational sessions. Approximately 290 athletes across a range of different age groups will be selected into the Academy.

The three Academies will run at varying times, based around when National Championships. This allows for greater specificity in terms of the timetable for each age group, but also in terms of the content covered within in each Academy.

The evening session will see athletes placed into small groups to work on selected skills and concepts under the guidance of the Athlete and Coach Development Coordinators and High Performance Coaches. There will also be four “Match Play Sessions” on chosen Sundays, at which athletes will play full field matches and undertake theory sessions.

Selection in the Hockey Victoria Academy is possible through two different avenues. Players that are selected in U13, U15 and U18 Blue or White State Teams (and satisfy the above age criteria) receive automatic entry into their relevant Academy. The secondary entry point is through Draft Camp.

Please note the U18 Academy has closed for nominations; Draft Camp has already been held for this age group.

What is Draft Camp?

Draft Camp provides the opportunity to improve their skills, techniques and understanding of the game through intensive skill development in small groups, modified games and full field match play. Additionally, Draft Camp provides players with the opportunity to be assessed and potentially gain selection into the Hockey Victoria Academy. It is the ONLY entry point into the Hockey Victoria Academy for those athletes who have not gained automatic entry. 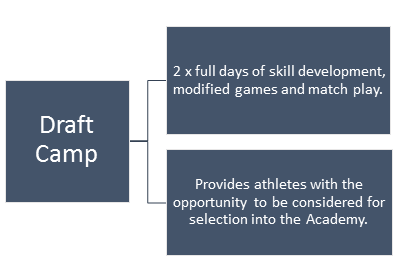 This year, we will be running three different Draft Camps. Please refer to the table below for which Draft Camp you are required to attend and when your Draft Camp will be.

At Draft Camp, players are introduced to a range of skills under the guidance of our High Performance coaches. They are assessed according to their skill level, fitness standards, coach ability and game awareness. Each day will consist of small group skill sessions and game play, with fitness testing carried out throughout Day 1 & 2. Coaches will provide ongoing feedback to players throughout the program, which they can take away with them to work on if unsuccessful in getting selected into the Academy.

The numbers selected from Draft Camp will be dependent on the numbers of athletes who have accepted their position in the Hockey Victoria Academy from the automatic selection process.

Coaches include some of Victoria’s top players, including current VIS scholarship holders, Vipers and Viking players. Groups will be limited to 100 field players and 10 Goal Keepers. Players selected into the Academy will be notified by email shortly following the Draft Camp.

Be sure to register early as Draft Camp has previously sold out well before registrations close.