The recent announcement of citizens who have been recognised with an Australian Honour or Award brought some very pleasing news, and we were particularly pleased to read the list of local recipients.

The Geelong Hockey Association is delighted to congratulate Joe Crosbie, who has received the Order of Australia Medal for services to the community.

Joe is the current Treasurer/ bookkeeper for the Geelong Hockey Association, and has been doing a fantastic job in this role since 2014.  Joe also held the position of GHA Secretary from 2019 to 2021, and Public Officer in 2019.  Joe also offered his services as Treasurer for the Golden Plains Hockey Club in 2021 and has helped the club to a financially sound position.

Joe’s involvement with hockey in the Geelong community began in 2006 when his son Will joined the Newtown Hockey Club. Will’s last season in Geelong was 2016, but Joe has continued his commitment to the growth and sustainability of the Geelong Hockey Association in the 6 subsequent years.  His attention to detail and the astute management of the Association’s finances, especially through the recent COVID crisis, has been instrumental in keeping the Association in a sound financial position.

Service to the Geelong Community

Lifeline has been a major focus for Joe for many years. We are also delighted to note that Joe has recently been honoured by Lifeline Geelong and South West Victoria, with the new Lifeline crisis support centre callroom named after him.  Joe served on the local Lifeline board from 1997 to 2019 and was Chair from 2011 to 2019. He also volunteered on Lifeline Australia’s board from 2004 to 2008.

Joe has also served as:

Well done and thank you Joe! 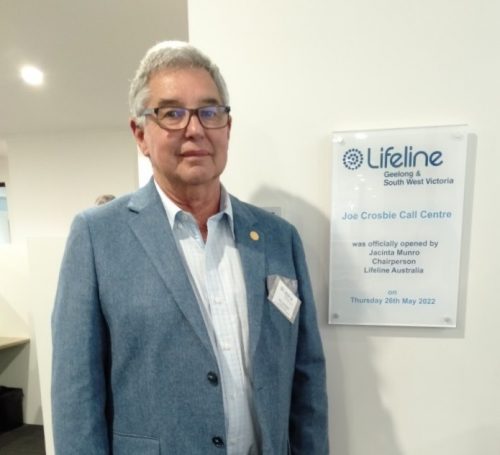 Did you know?  YOU can nominate any person for consideration for an Australian Honour or Award.