The Hockey Geelong Sharks have been entering junior teams in the Hockey Victoria winter metropolitan competition for more than 25 years.

No matter which local club you play for, all players from around Geelong are encouraged to attend the Sharks trial sessions.  They are an opportunity for all junior players to improve skills, learn new skills and practice with other kids who are keen to do the same. The Sharks games being played on Friday nights enable you to play your regular club hockey.

Junior Sharks teams play in a home and away competition against the best players in under 14 and under 16 age divisions in the highest level of weekly junior competitions in the State.

Games are played in girls competitions and boys competitions, all on Friday nights during school terms 2 and 3. Training is held on Tuesday nights at Stead Park from 6.00 to 7.00pm

Teams have a coach, assistant coach and team manager, all supported by Hockey Geelong to guide junior player development, teamwork and skills.

Hockey Geelong’s Junior Sharks program is the opportunity for interested players to take a ‘next step up’, providing players with development opportunities that can also help prepare them to take part in trials at State Championship and National levels.  Many of Hockey Geelong’s junior players have been selected to play with the Western Metro Wildcats in the Victorian Junior State Championships.

Players are also encouraged to try out for the Hockey Victoria Junior Academy training squads in preparation for State team selections. At the State level competitions, players are identified as possible future national players.

The Junior Sharks program is also the next step on the pathway to the Senior Sharks teams who compete in the Hockey Victoria competitions. Hockey Geelong’s Senior Sharks teams have reached the Men’s and Women’s Premier League in previous seasons, the highest level of hockey competition in Victoria. This means they regularly play against National and Olympic level players.

There are also planned holiday clinics to enable Junior Sharks to learn more advanced skills from those who have played at the very highest levels. 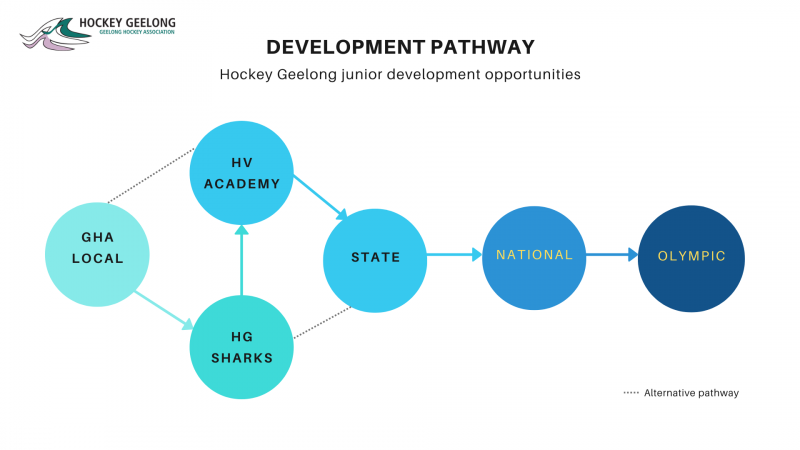 The 2023 season commences on May 5 (tbc) and runs for 14 rounds, with a mid-season break for the July school holidays, before finishing with a two-week finals series.

Selection Trials for all teams will be conducted over the same period.

If you cannot attend a Selection Trial, please fill in an Exemption Form, available by emailing:       nwilliams3228@gmail.com

The annual JCC sees regional Victoria’s most talented Hockey players representing their Regional Associations at a weekend long event. It typically takes place in mid-May and there are Under 13, Under 15 and Under 18 Boys & Girls divisions offered.

Use the nomination form above to register your interest in being part of the Geelong Hockey Association teams for the JCC tournament.

Look out for some upcoming information on pre-trial junior hockey clinics, currently being planned for early February.