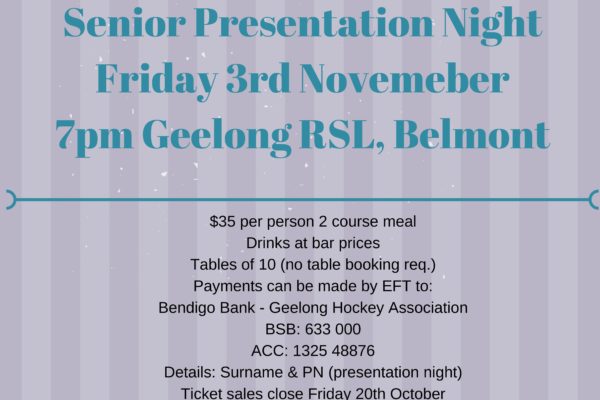 Umpires are needed for the Hockey Geelong U13 & U15 Mixed Carnival to be held Saturday, October 28, at Stead Park. Games start at 9am and go till last game starts at 4pm. The carnival involves U13 teams and U15 teams from regional Victorian clubs and associations. Games are (at this stage) 25-mins – 2...

Congratulations and good luck to all players and officials who are participating in finals this weekend! PDF of schedule available here

Please come and support our Hockey Geelong Rep teams as they play their finals. Starting tonight, our U16 Mixed take on MHSOB at  Melbourne High School (MCC) at 8.30pm – please note entry to MHS is only off Alexandra Ave, not Chapel Street. Saturday and Sunday offer more hockey for our our Senior Women’s Rep...

J-Ball is coming to Stead Park